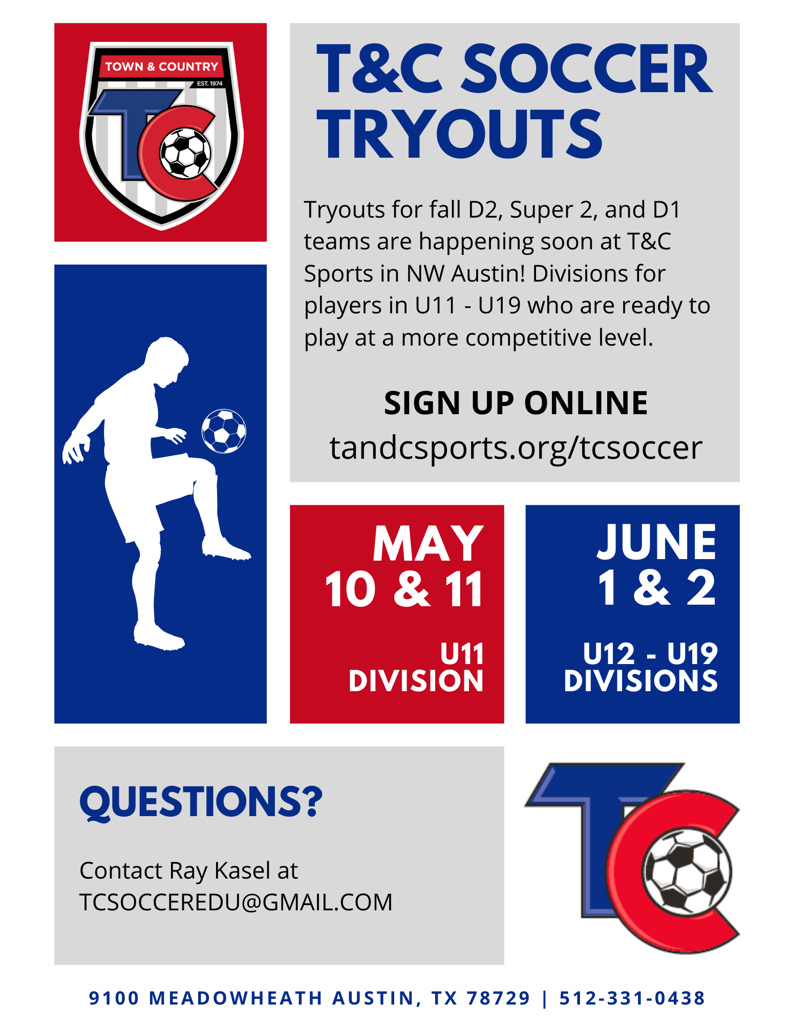 We offer three levels of play at T&C, Recreational Development (D4/D3), Competitive Development (D2/S2) and Competitive Select (D1/SCL/FDL). Tryouts traditionally are utilized to separate players based upon ability and coachability. While this is still somewhat true of T&C tryouts, we try to do things a bit differently. T&C will always promote the family-friendly environment and the ability of friends to play with friends.  At the same time, we do our best to place players at the correct level of play based on their current skill set and understanding of the game. Sometimes these two philosophies contradict each other.

In the end, tryouts will help us determine the recommended level of play for your child.  While we will do everything to honor friend and coach requests, we also will not place players at a level of play they are not ready for. This is done in the interest of protecting every child, physically and mentally.  Our goal is to build confidence in every player through a supportive and safe environment.

*Players need to only attend one night of the tryouts

Birth years for each division are below 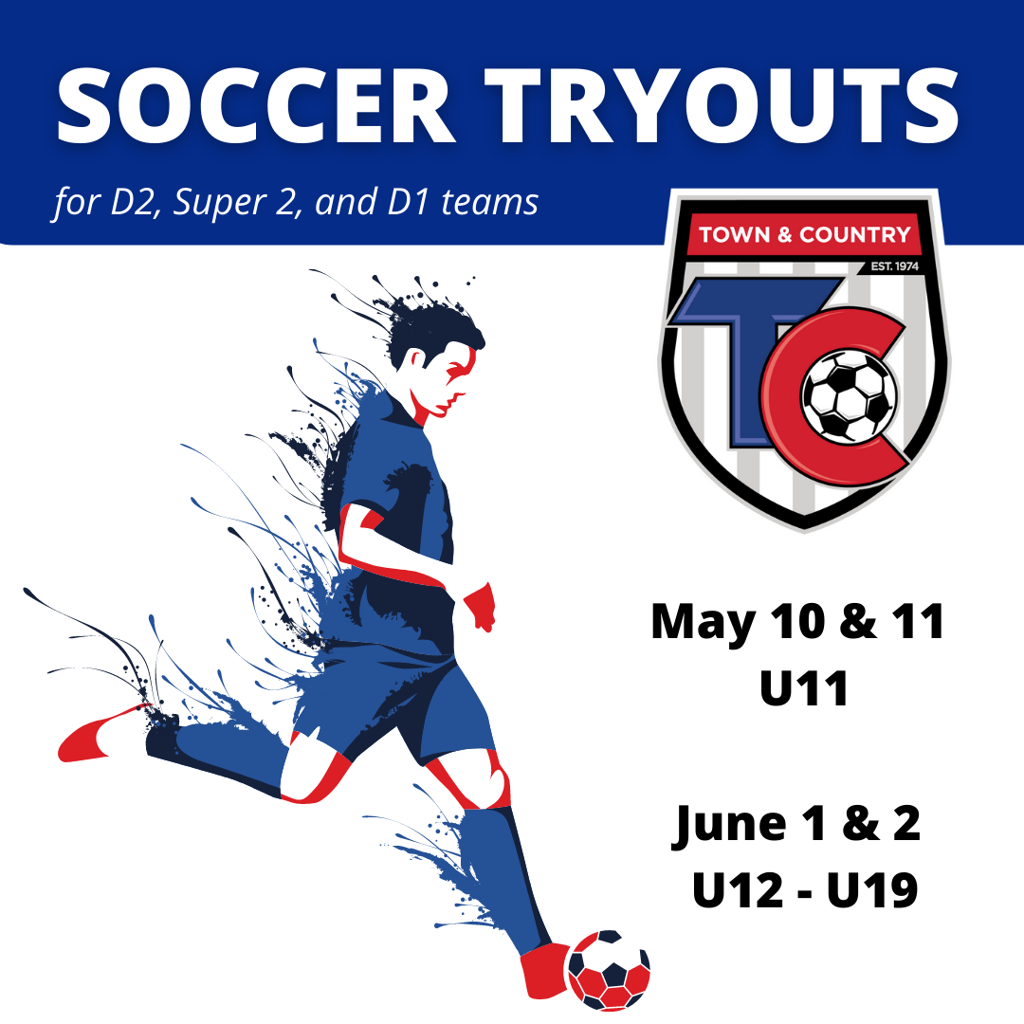 Tryouts are approaching and we want to make sure you are fully informed about the process. Tryouts will be held for players born 2011 or earlier who wish to play competitive select soccer in Division II, Super 2 or Division 1.

There is a great challenge in finding a coach who can take a player and turn them into a self-aware and confident human being. The coach who can find promise and potential in even the least skilled player is all too rare. Coaches should teach so much more than soccer to kids. It is far easier for a coach to say "I would be a better coach and I would have a great team if I had more skilled athletic kids". A coach is not made great by having a bucket of skilled players at his/her disposal. Great coaches find ways to bring out skill, confidence, compassion, respect and a love for the game in every individual, and thus create great players. Many times that coach is simply a parent who genuinely cares and learns the game along with the players.

I want to highlight the "love for the game" comment above, it should be our focus as a club, the focus of coaches and parents. Three out of four players quit sports by the age of 14, mostly because there is an overemphasis on winning, lack of fun and overly negative coaching/parent/teammate behavior. Many coaches and parents are demanding kids to play a game the way adults play and expect them to behave as adults. Kids play soccer because it is fun, it is a time to be with friends, they enjoy the competition and just running around. If we do not give them this, they will be done with the sport all too quickly.

When considering the competitive level of a player or a team each season, we evaluate many things. In the past, we have had a number of individual players and entire teams move up a division for all the wrong reasons. Coaches often move up for reasons such as fear of losing players, roster control, personal agenda, pride or pressure from another coach and/or parent. The greater majority of such teams have disbanded after one year. These teams typically were easily beaten in the higher division, team moral went down and the coaches demanded more from players in order to compete.

Though it is difficult to explain to a young athlete, the title of the Division they play in doesn't matter, it does not define them as a person. Tryouts are simply a way of recommending the level for a player. The level of play should provide an environment where players can grow in individual technical skill, confidence and character while have a ton of fun doing so. This statement is true from the lowest to the highest levels of play.

Which Division Should My Child Play In?

This level of play is for players who are still working on the technical fundamentals and understanding of the game. It is the first step in becoming a technically sound player. It is a fun soccer laboratory where kids can experiment with different skills while playing with friends. A place where they can learn and grow without the competitive pressure of higher levels of play. However, players do compete and are challenged when they are on the field. Players at this level have the same opportunities for additional technical training, outside of team training and at no additional cost, as all other levels of play are offered. There is a required 50% playing time during games for every player at this level.

This is a more competitive level of play where players have a strong foundation in fundamental technical skills. However, it is still a development level where players are looking to further develop and move towards mastering fundamental technical skills. Though the competition level is higher, it is still meant to be a fun and welcoming environment. We still want friends playing with friends as much as possible, though ability does play a factor. There is a required 50% playing time during games for every player at this level.

This is the most competitive level of play where players have somewhat mastered fundamental technical ability. Players also have an understanding of position and movement, are very coachable, and are dedicated to continuously improving outside of practice. Regular attendance and focused effort are required at this level. However, the fun factor is a prescribed part of any soccer environment, even in the most competitive levels of play. Equal playing time is not required at this level, playing time is determined with practice attendance and level of effort given during practice in mind.

Fundamental skills are listed below. Typically players at the highest level have somewhat mastered these skills with both feet.

Dribbling (open field, with pressure)
Passing (push, driven, lofted, 1-2 touch)
Receiving / Trapping (feet, thigh, chest)
First Touch (into space, away from pressure)
Movement / Support (around the ball, in and out of possession)

Below is the official description for each division.

Division III - Recreational - Under 11 through Under 19
Designed for players who enjoy the sport for the social aspect as well as developing their skills, recreational teams in these age groups are formed through assignment of all interested participants to a team, neighborhood, zip codes, schools, and buddy requests. There is a requirement that coaches make every effort to play each player at least 50% of each game

Division II – Competitive – Under 11 through Under 19
This introductory level of competitive play is designed for those who are interested in a stronger commitment to the game and want to continue to develop their skills through better competition. Selection of players based on talent and ability is permitted and generally includes a pool of players from a broader spectrum. There is a requirement that coaches make every effort to play each player at least 50% of each game.


Super II – Competitive – Under 11 through Under 19 (Born 2008-2000)
Selection of players based on talent and ability is permitted and generally includes a pool of players from a broader spectrum. Teams participate in the Super II league within the District which requires more commitment with regard to travel and expense. There is a requirement that coaches make every effort to play each player at least 50% of each game.


Division 1 – Competitive – Under 11 through Under 19
Recognized as the highest level of play within the state, players may be selected from across the state based on their ability, skill, and commitment to the sport including a more demanding practice and game schedule. There is no play time requirement at this level for U13 - U19. U11 - U12 coaches must make every effort to play each player at least 50% each game.

How Should A Child's Current Coach Communicate Tryouts?

Typically, players and parents look for guidance from the coach when it comes to tryouts. It is extremely important that every T&C coach communicate directly with each rostered player/parent. A coach should provide feedback on this past season and as to if a player should attend tryouts. As a parent, please make sure to read all the criteria for a player attending tryouts below and discuss this with your child's coach.

If you need to reach beyond your child's current coach for any reason, please contact the age-appropriate commissioner. You can find contact information for your T&C commissioner.

Who Should Register For Tryouts?

A player should NOT register or attend tryouts if:

A player should register and attend tryouts if:

The third and fourth items are difficult to accept for many coaches and parents at times. However, please consider that If a player is not playing with other players of similar skill, that player will not grow individually. If a player has outgrown what his/her current coach can offer, that player should move onto the next challenge. If a player has not responded to a coaching style or has become stagnant in skill development, that player should transition to an appropriate team/level - a change may aid them in their struggle.

This may lead to some rather difficult discussions between players, parents, and coaches. However, if we do not encourage individual player growth at the appropriate level, we are not helping our young athletes. I cannot stress enough that this is about the individual player and not the win/loss record of any team.

Should A Child Play Up In An Older Age Group?

Rather than going into detail, have a listen to the following podcast from Coaching Soccer Weekly. This podcast is from a coach's perspective rather than a parent's. However, it should provide great insight into the question.